What do you have in your house!

There is a fascinating story told in the second book of Kings, Chapter 4, where Elisha the prophet encounters the widow of one of the company of prophets. As the deceased man had debts, not only was the widow destitute, but she was in danger of losing her two sons to enslavement by her creditors. In the culture of the time, the woman was dependent on the men in her life. Her husband (and presumably her father) were dead, and it would be through her sons that she would have honour and value. It is likely that her sons were still young, so in desperation she reaches out to the Prophet Elisha. History does not record what resources Elisha himself owned, it is likely he had little, that he lived a quasi-hermetic life and spent much of his time listening to the voice of God and communicating God’s messages to the great and the good. In other words, he himself had little to offer to protect the widow and her sons from the creditors.

Elisha turns the request back to the widow; ‘How can I help you?’; ‘What on earth to you expect of me, I am as poor as you’;  ‘What do you have in your house?’;  ‘Have you anything of value that you could sell and pay your debts?’.  She replies that she has only a small jar of olive oil left. This would have been a clay jar, small and of little monetary value. 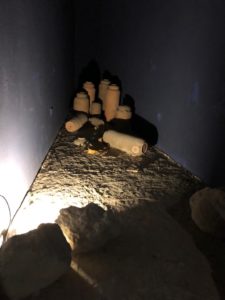 She was in serious trouble, but Elisha always had an ear open to the Voice of God and realised there was huge potential in even so small a treasure. He urges her to get as many clay jars as possible, to borrow them from her neighbours, to beg for them if necessary and then to go into her hovel, close the door and take a small but giant step of faith. ‘Start to pour the olive oil into the first jar and keep pouring until it runs out’. It is as she is pouring that the miracle begins. Jar upon jar is filled with this rich viscous oil; we can only imagine the awe and the wonder among the young boys and their mother, we can almost hear the gasps and giggles of delight as the small room is quickly crowded with clay jars filled to the brim with this valuable treasure. And still the widow does not lose sight of what is happening here. In awe-struck tone she tells Elisha what has happened. Her voice is no longer despairing but filled with hope. His message is clear, ‘Take what you now have in your house, multiplied beyond expectation, and use it to clear your debts’. What joy, what fear, what wonder would have fell upon that village when the word spread about what God had done. He had taken a little and turned it into so much more. 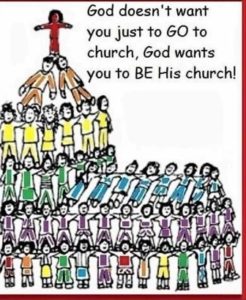 So what is this story saying to us, as a parish, as a Church and as a continuously changing community?

Firstly: That we should not underestimate the potential of the few. Numbers may be down, indifference and apathy may be rife, but God does not see things as we do. We see the limits; he sees the potential.

Secondly: The widow had nowhere near enough jars to hold the provision of God; she had to reach out to her neighbours and get their help. How often do we limit the power and potential of God by holding everything close to ourselves?  Fear, pride, self-sufficiency, can so easily cost us what God has for us.

Thirdly: That God has already given us the collective resources to meet our present needs. Instead of lamenting what we don’t have, a youth pastor, a curate, enough leaders or young people, a purpose built parish centre: let’s take what we have, a community of all ages and levels of commitment with God-given potential and let’s start being Church – a fellowship of faith, a community of carers, a society of servants. What do we have in our house? Quite a lot!