A Man Called Noah Chapter 5: Build me an ARK

Naamah was troubled, she knew Noah was unsettled. He wouldn’t speak of it but she saw it in his eyes, they never seemed to stay still, as if he was constantly searching for something. He was restless during the night too, which definitely wasn’t like Noah who loved his sleep. She would often awaken with the space beside her empty in the pre-dawn hours. She would find him outside, searching the starlit heavens. He even began wandering into the forbidding forest behind their tent, counting, measuring, always measuring. Naamah knew her husband, knew his integrity, and his faith in a God she was only beginning to learn about. She found herself constantly praying for him, asking the God of her husband to help him find peace. Peace had been the hallmark of their relationship in recent years, but now she had other matters to consider; it was still early on but she knew that deep within her new life was forming. She needed all of her husband’s faith and strength as she faced the scary journey to motherhood without her own mother to help and advise her. She needed her husband more than ever, but he seemed to be miles away from her even as she stood beside him. Finally, early one morning, her fears found their voice. ‘Noah, do you not care that I am afraid?’ Her question shocked him, he looked at her as if he hadn’t realised she was there. When he looked at her, really looked at her, he saw that her cheeks were flushing pink, they somehow seemed fuller than he remembered. He saw her hand hover over her stomach and suddenly everything made sense. His beautiful beloved Naamah was preparing a place of safety and sanctuary for their first child. The light of peace slipped slowly back into his eyes; he would do likewise for his family.

Word soon reached the inhabitants of the nearby oasis that there were strange happenings at the homestead at the dark end of the valley. Those who spied on the couple could soon see there was a child on its way, but it was the news that Noah had started knocking down trees in the dark forest that aroused most interest, and even alarm. The Taller-men of the village had long memories, the blood of the warrior chief was on this man’s hands and while they endured his presence for fear of the Mark of Cain, to hear that he might be setting up a permanent dwelling place so close to them was not good news. Meanwhile each tree took a week for Noah to cut down and strip back its branches. The villagers watched sullenly from a distance. With Noah refusing to answer any questions rumours began to spread. ‘It was for a new weapon of war that Naamah’s brother had devised.. it was to create a fence to enclose his part of the valley..it was to build a dam that would block off an underground river that fed into their oasis’. Each rumour brought new tension and endless discussions around the firepit. Some wanted to attack and drive Noah away before he could grow in strength against them – others advised caution and patience…’wait and see what the old fool makes, we can easily take it off him at any time’.

Noah was beginning to cut at the base of his 28th tree when his grandfather, Methuselah turned up. Noah’s father, Lamech, was dying. Noah dropped his axe to get ready to rush to his father but the ancient Methuselah grasped his arm with surprising strength. ‘Do not leave this place until that which you have started has been completed’, he hissed through worn down teeth, ‘Obey God, he will take care of your father, besides, you will soon be a father yourself. Even now your beautiful wife lies within your tent in the first pains of childbirth – go to her – I will watch your flocks for you. A few days off will not delay God’s plan’.

Noah rushed to the tent to find Naamah in considerable distress. Noah wished for the wisdom of his mother as he tried to comfort and prepare his wife for what was coming. There were tears of joy and delight when Shem arrived hale and hearty. As Noah gazed lovingly upon his family, he realized he would have many years to prepare for what God was sending upon the earth. There would be days of torment and back breaking work, days of dull familiarity and with little obvious gain; but each one of those days would be critical to protecting his loved ones. He was already aware of some of what was going to happen but God had yet to reveal to him the full extent of devastation that humanity was blindly bringing upon themselves. All Noah knew for certain, as his newborn son clung firmly to his smallest finger, he knew that he would do whatever it took to protect his son. He would obey and trust God to the very end, He would build a huge boat in the driest corner of the valley. He would build an Ark, whatever that was!

Days blended into one another as Noah relentlessly cut down trees, each one taking a full week to prepare, until hundreds of trees later, Noah looked out on a now barren wasteland and the vast collection of fallen treetrunks. Every single one of them would be needed, as indeed would the rope that Naamah wove daily from the strips of bark that they pulled off the fallen trees. As he worked, he prayed; and as he prayed he learned to listen to God. He began to realise that the trees were dark and forbidding because they drank from the black soil into which they sent long roots searching for water deep beneath the forest floor. It came to him that he would need both soil and water and blackened bark to create a thick paste with which to seal up the gaps between the tree trunks when he finally worked out how to stack them one atop another to build the base of the boat. By now Shem had been joined by two brothers, Ham and Japheth, who grew up in the eerie shadow of a falling forest. The boys learned to play among the tree lined graveyard that stretched out behind their tents. They learned to climb the still to be felled trees using woven ropes. Noah taught them the knots to be tied nearer the top of each tree, so that the rope could guide the direction of the tree’s fall to the earth. The end of each rope was rooted into the rocky ground by one of the iron spikes. In their younger years the boys would waken with great excitement on the sixth day of each week, it was the ‘falling day’, when Noah would slowly loosen the knots on the spike so that the tree would fall in a series of jolts along the path Noah had chosen for it. It wasn’t just the excitement of the noisy capitulation of the giant tree to the forces that brought it crashing to the earth- ‘falling day’ was also a feast day. Their mother would cook a lamb in celebration; their father would have picked and pressed the grapes of his growing vineyard to make wine. He would drink leisurely that night as he gazed upon what had been achieved that week.

Their distant neighbours had given up trying to guess what madness drove this outsider. Some would try to question the boys as they brought their flocks to water in the early morning, but the boys were warned repeatedly never to mention the word ‘boat’ or ‘ARK’. They would ignore all questions, often leading to taunts and, as they grew older, to threats of violence. The years had been good to Noah and his family, they were strong, and healthy from all their hard work. They laughed a lot, fought rarely and never for long. There was a peace that reigned among them based firmly on a shared purpose to obey God’s instructions to the letter. Old Methuselah came to live with them after his son Lamech had died. He would enthrall the boys and Naamah with stories and insights into how God had related with humans from the very beginning. He watched Noah and Naamah as their love blossomed beyond the scars of their first meeting. He particularly enjoyed watching the boys experience the rough and tumble of boyhood becoming manhood. Shem, the sensible one, always keen to do what was asked to the best of his ability. Ham, the anxious explorer, who took to wandering far and wide to see what the dying world was up to. Japheth, the musician, who learned the songs of the ancients and brought joy to the fireside as the day was quietening down. Old Methuselah watched, and waited, knowing that more than one storm was brewing. 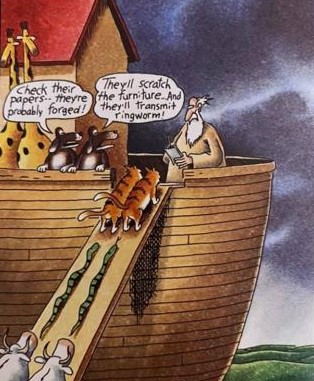