Lighten our Darkness, Chapter 4: The Proclamation 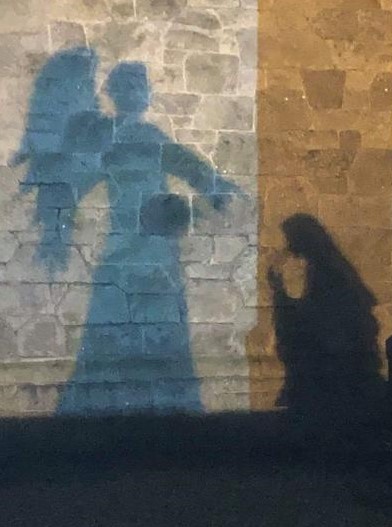 Gabriel flew, silent and unseen, over valleys and mountains to the village that was mere miles from the Royal palace , yet worlds away from the opulence and vain glory of earthen kings. Small mud and stone houses were cluttered closely together, narrow alleys and streets twisted amongst the homes. Each home had three levels of sorts, the ground level was earthen and despite many hours of cleaning, the smells and odours of sleeping animals lingered long into the day. On a raised wooden platform above where the animals slept by night and the humans lived by day, was where the humans slept. Fleeces of wool and cheap cloth lay across beds of rushes and straw, small stools scattered among the sleeping spaces so grownups could talk while the children slept. The third level was accessed from a series of stone steps on the  outside wall of the house that led to the roof.  Here was the place of rest, of sanctuary, from the clutter below. Here a fraying cloth hung on wooden poles, giving respite from the searing sun to the resting soul. Here it was that prayers were said; and here it was, as the teenage Mary made her way back down the stone steps, that God’s messenger met her.

She was not alarmed to see a stranger standing on the steps below her, in such close living arrangements, meeting people was commonplace. But his greeting confused and unsettled her. Gabriel could see it in her eyes, the wondering, the uncertainty clouding the pretty young face: ‘Greetings Mary, you who are highly favoured, The Lord is with you!’ She was not afraid, Gabriel was glad to see, just unsure. He could see her mind trying to work out what this greeting must mean. This stranger who knew her name could see her poor circumstances and yet was calling her ‘highly favoured’. What was going on? Gabriel smiled reassuringly, ‘Do not be afraid Mary, for you have found great favour with the God you were just praying to!’ She felt as if her whole soul was opening, as if God himself was gazing upon her. Amidst the emerging fear she somehow felt also peace. This lasted only a millisecond until the stranger spoke words that would change her life forever. Holding out a golden cylinder he said, ‘You will conceive and you will soon give birth to a baby, a son, and you are to name him Jesus’. Gabriel could see a number of things happening at once within the teenager’s mind and body. Her heart yearned, but also ached. It was as if all her heart’s desires, known only to her and to God had merged within her mind. She could feel her body tingle as a surprising thrill of excitement filled her. This stranger’s next words added to these sensations ‘He will be great he will be called the Son of the Most High God’.  Mary’s eyes widened at that title as Gabriel continued ‘The Lord God will give him the throne of his ancestor David and He will reign over the House of Jacob; forever Mary, His Kingdom will never end.’ While her body still tingled, Gabriel could see a deep struggle within her. He sensed rather than knew that the presence of Lucifer was close by, even now trying to plant doubt in the mind and heart of this child of God. While Gabriel bristled at the intrusion, heavenly instinct stopped him from engaging the fallen one. This was a battle Mary alone must fight, the first of many. The messenger could only hope that the bond between girl and God was strong enough. ‘How can this be’, she asked him, ‘I am only a teenager I am..;’ she stumbled to even say the word,  ‘a virgin, I’ve never been with a man’. Gabriel could see doubt spread over her as she began to realise the ramifications of what was happening, a small tear emerging in the corner of her eye – ‘Joseph’ she wondered within herself, ‘what will my Joseph think?’

It moved Gabriel’s heart to see such pain and uncertainty, for a moment he thought that all was lost, that the free will of a young woman would undo the very heart of God, but it must be her choice.  It could only be by agreement. He sensed the words before God gave them directly to him, ‘ The Spirit and presence of God will come upon you,  and the power of the Most High will overshadow you. So the baby that you are to bear will be called the Son of the Living God’. The simplicity of the sentence gave no voice to the complexity of what would happen, but Gabriel could see the peace re-emerge as the deep struggle within her drew to a close; Her eyes widening, as did her smile, when Gabriel declared, ‘There is more, your cousin, Elizabeth has also become pregnant even in her old age! She who was thought barren has conceived a son, and is now in her sixth month’. He smiled at her love and devotion for her aged cousin as he spoke the next words; he could see her heart and body accept the truth and implications of all that was happening within her in that beautiful moment,  ‘For nothing is impossible with God!’