As the nights lengthen and the darkness descends on us all too early in the mid-afternoon, some of us may find ourselves overwhelmed. Numbers of Covid cases around the world are growing exponentially; even here in Ireland where much progress and pride has emerged under Level 5 restrictions, that unsettling unease has resurfaced. What if we can’t get the ‘R’ number down below 0.5? What if we can’t see our loved ones before, during and after Christmas: What if it all slips away from us even as news emerges that vaccines are in sight, at least for those who can afford them. Our lighter mood of late, generated from glimpses of future calm to the left and the gigantic buying power of the EU to the right of  us, threatens to dissolve in the cold light of a ‘different kind of Christmas’.

For all our grumbling in past years about the over commercialisation of the season celebrating the birth of the Christ Child, we find ourselves nostalgic for what we dreaded before. Never have so few advertisements brought so many tears and a heart yearning for the simpler things! But there is danger here too; a temptation to put all our (chocolate) eggs into the one crib-shaped basket, (if you’ll pardon the mixed metaphor!). You only miss the water when the well runs dry. Our yearning for the impossibly perfect Christmas has grown instead of eased in a time of crisis. We find ourselves almost frantic in renewed anxiety as we try to make our imagined disney-esque family gatherings real, with flakes of glistening snow starting to descend, and somewhere, nearby, an orchestra begins to play…! 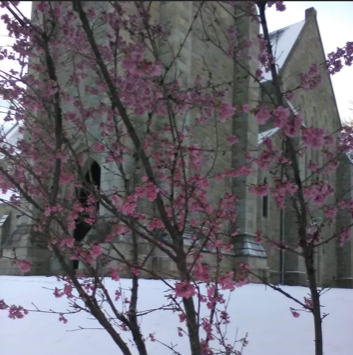 Your suspicion that I am being cynical may yet be misplaced. Let’s take a few moments to remind ourselves what exactly it is we celebrate. Social distancing probably wasn’t an issue for the young Mary, as news of her ‘miraculous’ pregnancy emerged everyone would have avoided her and her distraught self-doubting parents (Where did we go wrong? What did we do to deserve this?) Even the gentle Joseph would have kept his distance, seeking to isolate her further by sending her away. The relief for everyone when she decided to travel to her cousin Elizabeth must have felt almost refreshing and  yet she could not have travelled alone, who went with her? History does not tell us, but Mary’s unwavering confidence and faith do not find fulfilment with a bubble bursting extended family gathering. She finds fulfilment rather in a song, a simple child-like song of proclamation, acclamation and faith-filled trust. ‘My soul magnifies the Lord, my spirit rejoices in God my Saviour…’ These words erupting from a teenager who had every reason to resent and reject God. The potential for the profound lies most often with the young.

What mutterings met the now clearly maternal Mary as she returned to her home village, and fractured community, of Nazareth. Almost certainly the break away had done wonders for Joseph whose experience of angelic visitation had both troubled and transformed. Ignoring the judging sneers and gossiping gaggle, he goes about preparations for what must surely stand in history as one of the most awkward family gatherings at Christmas-tide. Here was one family who would have much appreciated a travel-ban, as the many festivities and social niceties demanded music, food, dancing (and dare we say it – copious amounts of wine). It would have been a party many people would have preferred to avoid, but none would have wanted to miss out on. The delicious overtones of scandal and shame. It may even have come as a welcome relief to Mary’s family when heralds arrived proclaiming that the Emperor Augustus had need of their money and each of them must go to their home villages and register for tax audits. While Mary’s family were already in their home village, Joseph was an outsider, a travelling tradesman, probably as much a stonemason as a worker of wood (the word in Hebrew means both). He was well-liked in Nazareth, hard-working, gentle and most likely related to many in the locality; but he was also obviously gullible to allow the shame of his young bride’s infidelity to taint him as well. And so, few would have waved them off as they packed up all their meagre belongings and headed to Bethlehem.

Their journey would have been long and slow, dusty and hot in the day time, cold and frightening at night as bandits and robbers lurked in the barren hillsides, happy to relieve you of the emperor’s taxes in exchange for a sharp knife between the shoulder blades. They would probably have heard Bethlehem before they would see it. There is always something about the gathering of distant family members in one place. It gets loud, and it can easily get fractious. Music and laughter, loud reunions and squabbling over who sleeps where; and always the lurking shadow of legionaries and collaborating tax collectors taking up the best rooms in the inn.

Not really that many places for a first time mother to have the privacy and the seclusion for the birth of a child. Laughter and scorn would have met Joseph’s increasingly frantic requests for a room. The rooms were filled by those who could afford it. Begone beggar, there’s room with the animals. And so, in a cave hollowed from a rock, with all the smells and noises of a petting zoo, Jesus was born amid complete chaos and confusion. And laid in a feeding trough, another ‘Son of David’ to be counted for tax registration purposes. Most of these present would never realise the significance of what happened that night. The screams of childbirth would have been quelled by the shout of recognition of long-lost relatives catching up on their distant cousins.

But on a hill-top, not too far away, a strange and unheard-of visitation was taking place. There is much discussion as to whether these were poor filthy shepherds, weathered faces from too many days leading sheep through dust and blazing heat to find food and water; or priestly animal experts responsible for the production of blemish-free lambs for sacrifice. Whichever, they must have been absolutely astonished at seeing not just one but a horde of heavenly messengers praising God and singing Hosannas to the King of Kings. The reference to the babe wrapped in swaddling clothes (just like the untainted new-born lambs being prepared for atoning sacrifice) lying in a manger, must have really caught their attention, because they all abandon their woolly charges and descend to the town below to see this thing that has come to pass!

Over two thousand years of retelling has sometimes over-sanitized this story, this remarkable event in History. In order to bring light and hope and joy to shatter the darkness, God comes among us (Immanuel), he resides, not in Kingly halls, but amongst the lowly and unimportant. He feeds, not on banquets befitting a king, but nutrient rich mother’s milk. He has only an aged man and exhausted teenager to protect him from the danger that lurks in every shadow; and there is already a death sentence hovering over this new-borns head. And yet, unseen, heavenly armies are ready to serve and protect until they can do so no longer, the birth of a King, hidden in shadows, awaiting his Epiphany.

All the knowing and wondering about what sort of Christmas we may be permitted to have must not dishearten  us. We will need new and creative ways of being family together while apart. We do so, not because we must, but because we should. All our focus is already too much on what sort of Christmas 2020 will be, personally I am much more focussed on 2021, and who will still be there to celebrate the extraordinary events of His-story with us. 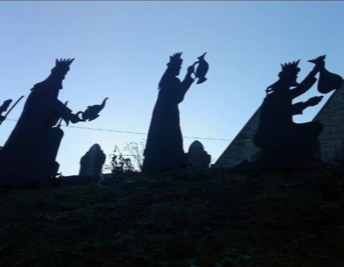