While we were sleeping

One of the all too many horrendous school shootings of recent years took place in Dunblane Primary School in Scotland on the 13th March 1996 : killing 16 children, and one of the teachers, and injuring 15 others, ‘he who shall not be named’ destroyed countless lives and shocked the world. Avril and I were in Paris on a break away at the time and I remember sitting in the hotel room and watching the news unfold in surreal detail. Among the numerous floral displays and children’s toys gathering nearby in the days that followed was a plain card with the words ‘the day that God slept in’. It was a powerful image, for surely that could be the only explanation as to why God seemed to do nothing while such horror unfolded. Of course God didn’t sleep in that day, He was there, among the carnage, the terror and the horror. Words never seem to be enough in the face of such evil and brokenness.

There have been far too many similar brutal attacks on children right across the world since 1996, we are all too familiar with the high profile, truly awful, events in Sandy Hook Elementary School in the US; The slaughter of young people in Norway, in Sweden, Russia, Manchester and so many other places. The murder of children evokes deep grief and anguish, it chills us as parents and haunts our dreams. I wrote the following poem in August 2017 following a number of tragedies that summer, it was an attempt to capture the bravery of some and the inaction of others, including ourselves.

On North African streets the children play
It feels so much like an ordinary day.
The rain has eased, but not gone away.
A dark hidden danger is on its way.

Walls of mud and mountain rubble,
begin to move, every second redoubles
A roaring river bursting houses like bubbles.
The children play on, oblivious to trouble

A roar so loud, it seems to deafen.
As faces look up, hearts become leaden
The destruction of life, too swiftly is spreadin’
A land torn by Ebola, by inaction now threatened.

They played on the streets as children should do
Their parent were watching, and gossiping too.
Then panic and terror-filled screams echo through.
Right place, wrong time; what are we to do?

On Spanish streets, the people they gather
To meet, eat and drink, the squares full of chatter
Las Ramblas is heaving with noise, fun and laughter
While danger drives up, to kill and to shatter.

The killers stare mindless with fanatical eyes
They swerve, pick and choose, who lives and who dies
Their minds filled with hatred, ideological lies
Immune from the pain, spurred on by the cries.

As loved ones are parted, and terror takes hold
Give thanks for the kindness of the brave and the bold
Who rescued, protected, brought into the fold
The broken and dying, too young and too old.

They played on the streets as children should do
Their parent were watching, and gossiping too.
Then panic and terror-filled screams echo through.
Right place, wrong time; what are we to do? 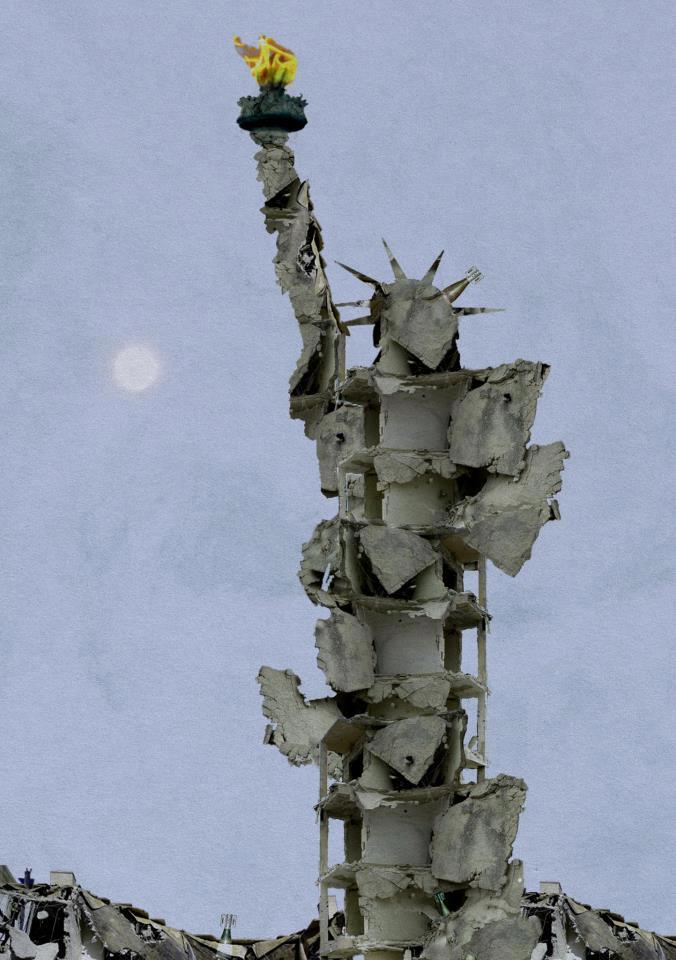 (Through digital media Syrian artist Tammam Azzam has reconstructed the Statue of Liberty from the rubble of a destroyed building in Syria).

Atheists and agnostics alike will tell you that one of the reasons they struggle with the concept of a God is because of the apparent feckless indifference that deity seems to have for human suffering. However I think that this perspective misses a critical point: It is not God who sleeps, but us. We as humans far too often take our eyes off the ball, we live lives and make choices that have devastating impacts on the most vulnerable and then wonder why God is silent. We sleepwalk into decisions that benefit us, but give no thought to what horror awaits those who will suffer because of our thoughtless actions.

We rightly worry about how the Corona Virus seems to be re-emerging here in Ireland, not so silently tutting at some of our younger people who are being reckless and irresponsible in their actions and inactions. What hypocrites we are! Our actions and inactions are having an even more devastating impact on the forgotten and immaterial. Where do we think our young people learned to look firstly to their own interests? Our indifference, our self-centredness, our feckless behaviour has taught them well. Who among us have exampled altruism, compassion, kindness. Our young people crave authenticity and they are not finding it in us! We have become so distracted by how one virus can and is affecting us that we are choosing to ignore all the other horrors that are not making it to our newsfeeds. We justify this by telling ourselves that we can’t cope, it’s all too much, we have to look closer to home for now! Bulls**t!