She watched, her heart filling with a joy that staggered her. Her son, laughing, joking, playful, teasing as his disciples and his brothers got to know each other. There was so much laughter, and not a little awe. She saw it in their faces, these simple fishermen , their faces weathered by too many storms, now fresh and excited as they saw more of Jesus. She could actually see the wondering emerge in their eyes, could this be the One, the Messiah. She knew it would take an awful lot more than providing wine at a wedding to convince them fully, but for now, there was joy in the awakening.

She would soon have to go home, it was time, there was much to be done, and a carpentry business to run, but she could not resist one last adventure with him. ‘Come to Capernaum, Mother’, he urged, ‘See where I stay’,  his eyes twinkled as she seemed to take a moment to consider – They both knew that she would not settle unless she could picture him in his new home, his new life. He laughed out loud when she said demurely – ‘Well if you insist!!’. He laughed and he ran, always running. His new friends and his younger brother running with him, jostling, laughing. Yes she would go; and she would soak in every single image of his new home, every street corner, every step, every image would be stored in her heart as treasure.

Capernaum was a significant town, its success lying in its proximity to the sea of Galilee. Fishermen and their boats dotted the pebbled beach front as the party made their way into the bustling streets. Mary marvelled that so few took notice of her son, so few yet understood who he was and what he was bringing to them; but that would change. She watched as her son’s mood settled, he too was watching. His eyes no longer smiled, but ached. He seemed to consume everyone he passed with his eyes. Mary’s heart lurched when she realised she was witnessing a mystery. It was a moment she would treasure forever – a moment that would sustain her through the darkest days ahead – As she watched his eyes she realized they weren’t just his eyes but God’s (Yahweh). It was as if God himself was seeing everything afresh from a new perspective – soaking up every detail, every gesture, every anxious thought. Mary witnessed unconditional, completely-consuming love in that moment. She shook at the intensity of that love, having to steady herself at the corner of a nearby house. It was the moment she finally understood what every single memory that she had treasured so deep in her heart actually meant. She heard again the Voice of the messenger – the words that had changed her life for ever. She heard again the voice of the Ancient Simeon – ‘And a sword will pierce your heart also!’ She had always associated those words as a warning, a preparation for the dark fate that awaited her son, but now she realized, that piercing sword referred to this moment; this moment when earthly and heavenly eyes collided, and saw the same fragile forms struggling to cope, struggling to survive; this moment when the compassion and love of the Father burned through the eyes of the Son – and loved so deeply, piercing like a sword.

Simon – No Peter, (he’d have to get used to that new name) – felt joy like he had never felt before. His life felt a completeness that he had hungered to fill for so long. His home was nearby and this was a moment he wanted to share with his loved ones. His beloved Joanna had died some years earlier, in childbirth, but her mother was like a mother to him, and she watched over his children better than anyone else could. Now he wanted to show her that all his wandering was not wasted – the hunger that had driven him to John, and now to Jesus, was a hunger for completeness, for meaning, for truth. Like her daughter, Joanna’s mother had been patient beyond measure – she understood the need, and never complained about the load she carried for him. Peter wanted her to see the answer to his searching – to hear the voice of the Messiah. He rounded the corner and staggered to a stop. Why were there so many outside his home? Something was wrong!  The children – a pang of guilt shot through him as he wrestled with fear and panic – Not the children, not now – whispered conversations stopped as he ran up – turning to muttering when those gathering like vultures realised it was him ‘Back from his wanderings’ – their voices dripping with contempt – ‘Leaving a grieving mother to deal with her grandchildren – too much, too much  she has run herself ragged – burnt herself out, while he runs off to God knows where!’

Peter pushed past them, into his home, his children gathered in a corner, all safely distanced from the crowd and the fever, he looked at his mother-in-law as she struggled on a mat of reeds. A kindly neighbour, at no thought to her own safety, mopped her sweat-soaked brow with cool soothing cloths. Peter’s joy had disappeared to be replaced by despair and guilt. He felt helpless, lost, bewildered. He went over to his three children, the youngest hiding herself in the skirts of her older sister as this ‘stranger’ approached, the older boy – still not seven years, standing strong as the ‘man of the house’ should, but his lips trembled and his eyes filled with tears. With a cry of anguish, Peter rushed to them, ignoring the confused reactions – he pulled them closer to himself, their stiffness melting to tears of fear and loss.

A shadow crossed over the doorway, and Peter looked up, seeing as if in a dream the  silhouette of Jesus entering the room. He too noticed the eyes consumed with love, but he was too upset to grasp their depth. There was a moment of shock rippling through those gathered inside the home and those outside as he went without fear to Peter’s fevered mother-in-law. Kneeling beside her – he calmly took her hand and helped her stand – at once the fever left her, at once her colour returned – as did her efficiency and she began shooing people out of the house – there was work to be done, children to comfort and visitors to be fed.

As she prepared the meal, the people of the town gathered in greater numbers, their hunger was not for food – but for hope. They brought their loved ones, so many broken in body and mind – and he healed them, every single one of them. His Voice, gentle and loving, but full of authority – his touch firm and unafraid. And as His mother and His friend watched him – they saw again the mystery – the all-consuming eyes of the Father – looking with deep deep love on the souls of His children. 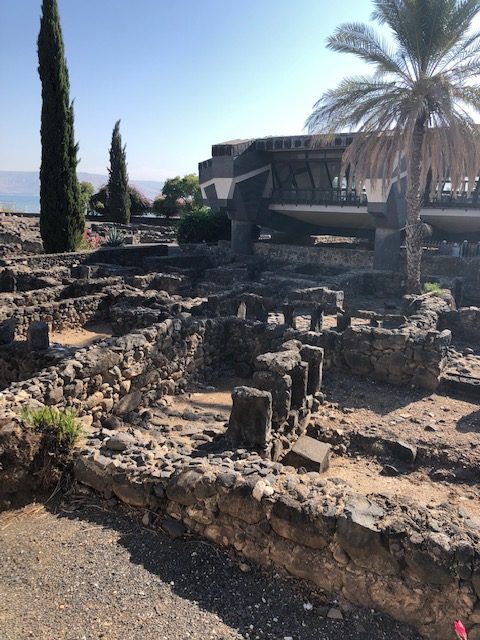