She had learned as a child never to look backwards – her father had explained what had happened to Lot’s wife. How she had disobeyed God’s instruction and followed her heart yearning for her home in Sodom and looked back to observe its fiery destruction and had turned into a pillar of salt. Her young mind had shuddered at the thought of the poor woman calcifying into salt that would have been blown across the ravaged countryside. But now, as an ageing mother, she thought she might finally understand what made Lot’s wife look back. Was she clinging on to the memories of her family home, the place where so much had happened, where celebrations and love was experienced. Mary steeled herself not to look back, not out of fear of turning to salt, but a fear that her heart would break. This house had homed her and her family for nearly thirty years. It was here that her beloved Joseph had brought her on their return from Egypt. Here, that Jesus had wobbled and walked, and then ran, always running, always exploring and asking questions. Here that her family had celebrated and loved. Even after Joseph’s death, this home had sheltered her, protected her, allowed her to roam through its tangible memories in the quiet hours of the night when she could not sleep. And now she was leaving, not for ever, not yet, but leaving at the beginning of a journey she could not yet comprehend. All she knew was that her home would never be the same again, and also that she daren’t look back!

After days of weakness and frailty is was so refreshing to have so much energy. He felt like he could walk for days, And he did. Sometimes along the Jordan river, sometimes in the foothills of the mountains. Not yet ready to drift into Samaria, but ready to speak, to tell, to proclaim. He had returned to the place of Baptism, but John was already in prison. The patience and anguish of Herod too deep to cope with a Holy Prophet who enthralled him and a mistress-wife who galled him. Jesus had stayed on the riverside for a day, remembering his wild cousin, praying for him, worrying for him. He had wondered would he stay here, continue John’s ministry of repentance and renewal, but the Voice within him moved him forward, always North, towards the home that would no longer be his. He wondered as he walked what had become of John’s disciples, especially the one with the Galilean accent, there was a roughness and a keenness in the broad face of that disciple. But it was that disciple’s hunger for truth that drove Jesus to divert from his journey to Cana, that brought him to the shores of the Galilee.

Along the way he had spoken with many, he had spent long hours sharing with fellow travellers North. His message was simple, ‘Repent, for the kingdom of heaven has come near’. It was not a new message. John had declared it from the banks of the river, but the Spirit within Jesus connected with the aching souls of his fellow weary walkers. John’s was a message of conviction, guilt about their failings; Jesus’ was a message of hope. That which had once seemed insurmountably distant was now present, immediately available. Many took heart, many were changed by His words, but none yet followed. That would change, and soon, but for now he had fishermen to find. 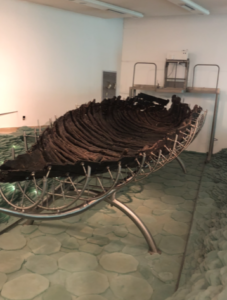 As he stood at the lakeshore, he saw a familiar face not the one he was looking for, but enough like him to be his brother. The man and his companion approached Jesus with excitement. They recognised him from the Jordan, and remembered John’s declaration, ‘Behold, the Lamb of the Lord’. The had fled when the soldiers arrived to arrest John, they had stumbled away like sheep chased by wolves. All that had been left for them was to return North, to their father and their families who were now well used to their searching for truth. The weeks had passed but their hunger hadn’t, so Andrew and his friend followed Jesus along the shore, until finally Jesus turned back and challenged them, ‘What do you seek?’ ‘Rabbi’, Andrew answered, ‘Where are you staying?’ ‘Come and see’, replied Jesus, and they followed him to his campsite, a fire burning on the rocky shore, fish already cooking, and they sat and they ate and were filled, not just by the food but by the Voice that spoke such truth and hope, and finally filled their searching spirits. Andrew became restless as the afternoon wore on, so he excused himself and went to find his brother, Simon. Simon was grumpy, frustrated by the backbreaking work, and yet comforted by its familiarity. He had never really wanted to be a fisherman, it was what he was born to be. Even as a boy he had yearned for something deeper, something that would settle his restless soul. He sensed a destiny that was far beyond these fish- reeking shores but what was destiny to a fisherman and his family when there were mouths to feed. He thought as worked on mending his father’s nets of his experience with John wondering what had become of the one who had stilled John’s voice. He grunted a greeting to his approaching brother, why was Andrew always so filled with optimism and energy? Couldn’t he see Peter wanted to be left alone? But Andrew’s breathless excitement made him pause and look up. He saw it before he heard it, those words etched in the rapt wonder on Andrew’s face. ‘ We have found the Messiah’ he gushed ‘come quickly’. Peter followed, convinced already by his brother’s certitude, but still wondering until he saw the face, the light of the campfire flickering upon his features as he laughed easily. Gone was the confused wonder on the face of a man driven from the Jordan, deep was the piercing gaze as Jesus looked directly at him, his eyes once again revealing his soul. The Voice spoke, His message clear but confusing ‘You are Simon, son of John, You are to be called Cephas/The Rock’. How did that name seem to fit so fully upon him, like a mantle, a cloak spread over his shoulders, a destiny that found its fulfilment in a single word – ‘Peter’. 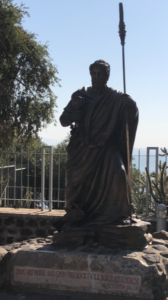