Mary stood, facing south, her feet fixed on the spot where last they’d stood. Life had changed, but continued, others had taken up his work. She had busied herself with preparations, there was a wedding looming and gifts to prepare. But each evening she stood in this spot, facing south,wondering, worrying. There had been no word; but then, none was expected. Sheonly hoped that he would remember. She shoved away the fears that snapped at her. Would he remember? Would he be there? Was he safe? A distant cousin had sought her out, weeks after his departure. He had told her of the encounter at the riverside with John the Baptizer; another treasure to store away. The Words of the Voice a comfort and a concern. The cousin had described the confusion in Jesus’ eyes as he stumbled out of the water – had almost delighted in his description of the wildness of his stature as Jesus disappeared into the
surrounding hills. But Mary understood the compulsion of her son, she had similarly been compelled to go to her cousin Elizabeth after the Angel announced the shattering will of God. She felt again that unsettling stirring as, with trembling hands she had prepared her pack and untied her donkey, and with little explanation to her frightened parents she had felt driven to leave. To be alone, to prepare for the life-altering journey ahead. Oh she understood what drove her son into the wilderness, but she wondered; she wondered where hewas at this very moment, she wondered what darkness assaulted him.

Jesus shivered in the cooling air, the sun slinking off to trouble others with its incessant searing heat. The cooler air calmed him, it distracted him from the growing hunger that created spasms in his stomach, but he knew what lay ahead. Another restless night, tossing and turning on these infernal stones. The place was full of stones, they tripped him up when he staggered from place to place, they dug into him as he lay sheltered from the sharp night wind, they seemed to laugh at him as he struggled to pray, or even to think.

It had been easier in the first few days, when he had allowed himself to be driven from the cold muddy waters of the Jordan, when the tender, comforting words from the Voice had rung in his ears and he had felt purpose. He hadn’t expected this journey into the wildlands. He certainly hadn’t prepared for it, but he had felt ready – this compulsion made sense, The Voice would speak more words to him, teaching him, preparing him, but as the silence settled around him, The Voice echoed away, leaving only a memory. For days he had travelled, his mind imagining the wandering of his ancestors through similar terrain. The stillness gave way to sameness as each day became another search for shelter and for water. He hadn’t felt hunger until the fifth day, but thirst had assaulted him from the beginning. It was late on the second day that he stumbled upon the trickling stream, dancing its way down the slopes of the nearby hills. And so he had climbed, following the water upwards, until he had spotted the cave. Sleep had eluded him those first few nights as every sound boded danger, he had planned to go further but The Voice seemed to say to stay, to wait, to listen and so he had, but for weeks now the only sounds had been the assaults of nature and the mutterings of his own voice. 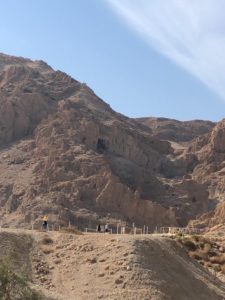 He hadn’t noticed that he had fallen asleep but a strange dream had driven him into wakefulness. He sensed rather than saw a danger but could not at first locate its source. But then he heard it, a different voice, softer, coaxing, gentle. He turned frantically around but could see no one. Still the voice continued. He stood up, headed for the mouth of the cave, and yelped in pain and surprise. Those blasted stones, his toes ached and burned. The voice seemed to draw strength from his pain, it seemed to chuckle and then
to challenge.

‘If you are the Son of God, command these very stones that annoy you so much, to become bread’. It was simple, it was subtle. It wasn’t about easing his cramping stomach with food, it was about removing a nuisance while ending his fast. He looked at the endless piles of stones, it was tempting on so many levels but it was not yet time. Soon there would be feasting, a wedding was looming, but his sojourn was not yet over. He batted away the voice with a long learned verse from the ancient book of Deuteronomy. A different pang assaulted him as he remembered Joseph reading the words to him many hears before: ‘He humbled you, causing you to hunger and then feeding you with manna, which neither you nor your ancestors had known, to teach you that man does not live on bread alone, but on every word that comes from the mouth of the Lord’. His own voice, unused to speaking for so long, rasped dryly – ‘Man shall not live by Bread alone!’

A small victory as the voice seemed to stumble, but quickly gathered itself again. In a rush of air and dust Jesus suddenly found himself in the city of Jerusalem, atop the highest part of the temple: The cool morning air whipping at his clothing so that, for a moment, he felt disoriented, and almost fell. He looked down, way down upon the early morning worshippers, andthe gathering stallholders, the robes of the priests blowing majestically around their inflated pride: The voice spoke softly, soothingly – ‘If you are
the Son of God, throw yourself down – for it is written – ‘He will command his angels concerning you, and they will lift  you up in their hands, so that you will not strike your feet against a stone.’ Jesus teetered on the edge of the abyss. The words of the Psalm of David surprised him, reminding him of the spot above his home, his village, where he had watched birds fly high in the air and wondered what it would feel like to soar among the heavens, to land gently and to launch upwards again. He smiled at the memory, and recognised the trap. What attention he would garner, what power he would wield, he could prove beyond doubt that he was the Son of God. But a growing doubt surfaced, as he watched the people like ants below,
what freedom would they have to choose their own destiny? What choice would they have but to believe? He shook his head, why was this so hard? Couldn’t he just lift one foot and lean forward? Would it be so bad, surely an eternity with God was better for them than a life of confusion and doubt?  But Deuteronomy again gave him his answer ‘Do not put the Lord your God to the test as you did in Massah!’ . As the voice
beside him faltered again for just a moment, tears of thankfulness flowed down Jesus’ face as he remembered Joseph laying foundations of truth into his mind and heart with the words of the Torah and the wanderings of Moses in the Wilderness.

The Voice dragged him forcefully from his reverie, and when the dust and wind settled, he found himself high up on an unfamiliar mountain, its sides steep and majestic. His body, weakened by hunger, felt the cold winds pierce him as flakes of snow and ice attacked him. The wind and storm roared around him and the voice screamed above it all, but Jesus didn’t catch the words, instead his watering eyes beheld a wonder. Slowly on the sharp strong crevices and outcrops pictures were being projected. Cities, ancient and new and still to come, bedecked like jewels glittering through the snowflakes. He gasped in wonder, not at the structures, but at the treasures, the beautiful broken treasures, his body wracked in sobs as he saw both the unique intricacy of each one, but also the shadows that threatened them. They were people of all the ages, filled with fear and confusion. They were beautiful and terrifying because their light was tempered by hollowness and despair. They were His people, His creation, His beloved, but they were lost. The voice stopped screaming its incomprehensible words and suddenly, as a whisper, filled his ears: ‘All this, I will give you, if you will bow down and worship me.’ If he hadn’t been listening more carefully Jesus would have sworn that it was the same Voice that had spoken so lovingly above the waters of baptism. As it was, he could see clearly what the voice was offering and it was so tempting; Why suffer? Why fight me? You’ll lose most of them if you fight me, but I can give them to you, every single one of them! I can save you so much pain, and grief and death itself. Just one small act of surrender, one small gesture that can save each of them, I was once His favourite, maybe you’ll be next, he’s fickle that way, but I know the majesty and worth of God, Give me just a piece, a tiny piece of worship, acknowledge that I am Lucifer – the light carrier, bend your knee to me.’ Jesus could feel a huge weight pressed down on him, intense and unwielding, but it was the pressure from within that nearly undid him. Why not? Wouldn’t it be worth it to have every single one of them safe, every one of them secured. He could picture so clearly the screwed up faces filled with anger and hatred, the clenched fists of defiance, the open palms of indifference as so many turned away,  as so many rejected him. How easy to give in, to surrender. He felt so tired, his mind addled by the physical and spiritual assault. But again it was the words read to him in his childhood that helped him. ‘You shall not bow down to them or worship them (false gods) ; for I, the Lord your God, am a jealous God’. And suddenly he recognised the difference between the voice and The Voice. With a shout that was primal and took every last bit of his physical ability Jesus cried out ‘Away from me, Satan! For it is written: Worship the Lord your God and serve Him only!’ 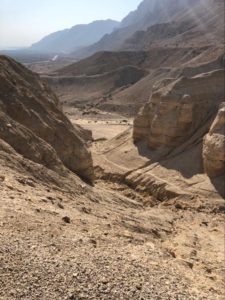 As his mind cleared and his senses sharpened he heard the voice scream obscenities at him, railing against him with rants and threats but whatever power the voice had held over him was broken by the teachings of his youth. He found himself huddled in the foetal position on the stone strewn floor of the cave. But he was not alone. A peace that was both physical and deeply emotional settled over him. His senses, newly wakened, smelled fish burning on an open fire, saw a holy messenger huddled over the flames preparing
the food. Another two were picking up the scattered stones and placing them in a pile by the entrance of the cave. Jesus laughed as he watched and loved. He knew what next he must do. Firstly to eat, then to bathe, then to travel back to Galilee; He had a wedding to attend and people to see along the way. His
fast was ended – as was his testing – for now…!