From Jordan to Jerusalem – Day 8

‘Once, In Royal David’s City’.
Today’s adventure brought us to the heart of Jerusalem. As we are entering our season of Advent, that time of preparation for the wonder and joy of Christmas, we will be singing that beautiful hymn, ‘Once in Royal David’s City’, and of course we are referring to the city-town-village of Bethlehem. However David had another city, one he conquered and developed when he succeeded Saul as King – The City of Jerusalem. There was already a walled city there, in the foothills of Mount Moriah, where Abraham had almost sacrificed Isaac, and indeed it it believed that the Jewish Temples and now the Golden Domed Mosque stood/stand on that place of sacrifice and provision. 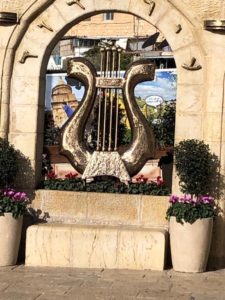 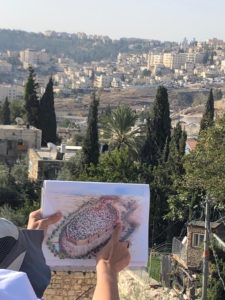 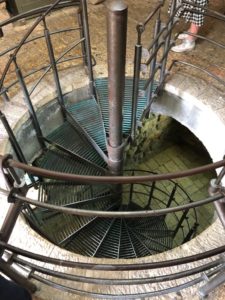 Of course David was a musician as well as a warrior, king and statesman. So his ‘harp’ has become one of the symbols of the city. Many cities are built on top of a hill, where they are harder to attack, Jerusalem was actually built on a lower hill overshadowed by the Mount of Olives and Moriah. The reason for this is our old friend, Water. There was only one spring to supply the city so everything centered around its location, protection and how to get the life-sustaining water to the city’s inhabitants. 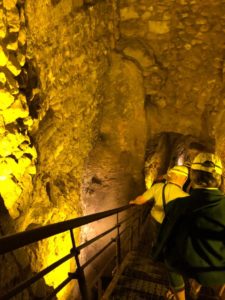 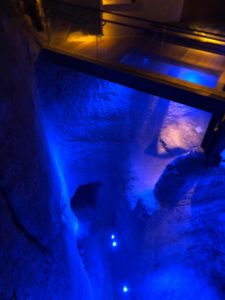 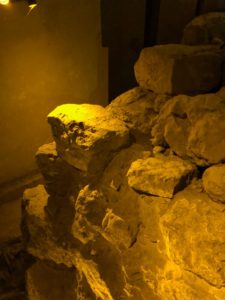 Much of our visit to the Holy City was spent underground as we explored three main (and long) tunnel systems. This was something of a challenge to those who were claustrophobic but it was so worth the effort. There were moments when you became aware of your vulnerability should an earthquake turn up, and too many moments when I felt a lot like Winnie the Pooh, wedged in a tight spot and waiting for someone to push me through. Thankfully the recent tummy trouble had reduced my waist band sufficiently to make it through!! 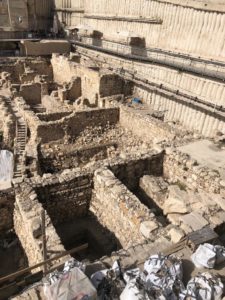 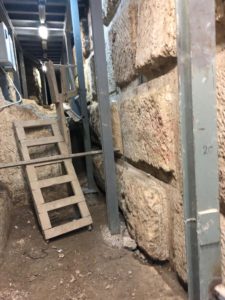 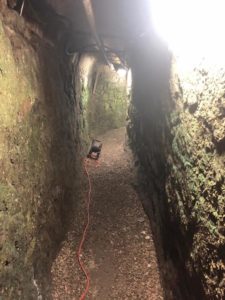 These tunnels were vital for water delivery, for escaping enemy attack and for access to the city. We found ourselves walking beside ancient walls that were anywhere from 2,000 to 3,500 years old. Excavation of Jerusalem’s ancient history is tricky for religious and political reasons. Home owners tend to get a little nervous when exploratory excavations begin since every place in Jerusalem stands above literally millennia of history and sacred sites. We visited the location of what was originally a very high arch that King Herod had built to access the city along beautifully paved pathways. As the years went by, what was originally a 20 meter high archway was almost touchable from ground level as centuries of earthquakes, demolishing armies and severe weather raised the ground level significantly. 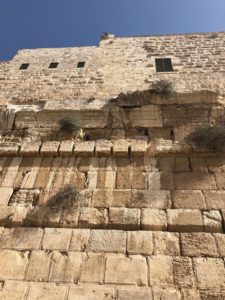 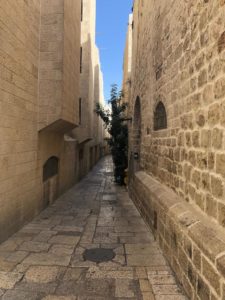 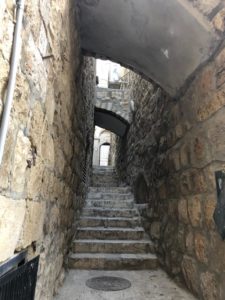 Jerusalem is famed for its narrow streets which make traveling by coach an interesting experience, but also adds to the charm and allure of this amazing place. We had long given up on the notion that we could somehow ‘step where he had trod!’, the crowds, the noise and the ‘bling’ made connecting with holy sites even harder. So did the reality that deep divisions among Christian churches have hampered much needed repairs and created a destructive history of ‘one up-man-ship’. This was particularly true of The Church of the Holy Sepulcher, the assumed site of the crucifixion. Within one towering badly maintained building are several ‘churches’ each with a claim for prominence. Such is the bling and busyness of the place it is next to impossible to get a true sense of ‘an old rugged cross on a hill faraway’! As literally thousands swarmed, heaved and queued we were brought by our excellent guide, Yael, to a hidden gem; A no longer used Assyrian chapel, with plain furnishings and soft lighting, and would you believe it, an empty tomb. While no one was claiming that it was ‘the empty tomb’ it’s simplicity was compelling and inspiring and beautifully breathtaking. 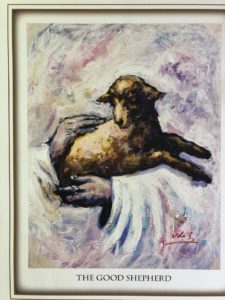 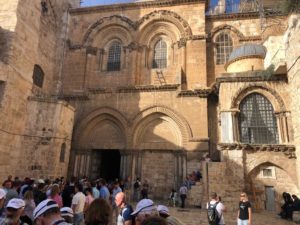 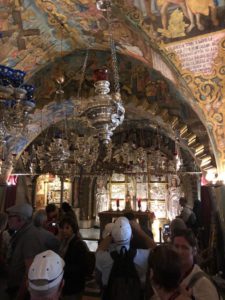 As our days in the Holy Land draw to a close, some went to explore Jerusalem by night while others of us succumbed to the comfort of our beds! Shalom. Baden 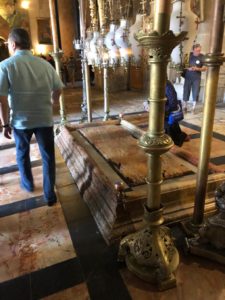 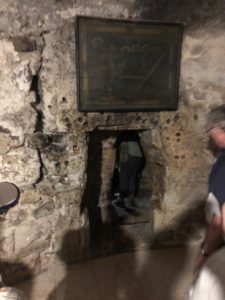