From Jordan to Jerusalem – Day 7

‘Ancient highs and lows’.
I was very young when I first became aware of what was then known as ‘the lowest place on earth’. A visitor to our primary school showed us a picture of themselves floating on the Dead Sea reading a newspaper. It was an image that seared itself onto my brain for all of those years since; and while I didn’t think to bring a newspaper with me, floating on the salt-ladened waters was a surreal moment. Because the Dead Sea is 500 metres below sea level it is surrounded by scorched desert, the density of the water makes it practically impossible to sink – and to get yourself into an upright position so you can actually climb out of the place!! As you get more confident you float out further and have the strangest feeling when you are bobbing in deep water unable to push yourself down beneath the salted sea. An experience like no other, definitely one for the bucket list. 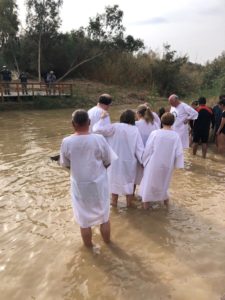 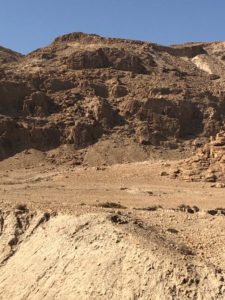 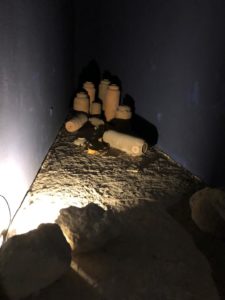 Before our visit to the Dead Sea some of us had a powerful experience of more life affirming water; a visit to the River Jordan where Naamon was instructed by Elisha to bathe to heal his leprosy. Also where John the Baptist reminded a generation of their sinfulness and their need to repent. The size of the River Jordan is now much depleted, its waters are muddy and surprisingly chilly, but you can still picture Jesus arriving on the riverside, greeting his cousin John and presenting himself to be baptized. As an Anglican I understand my baptism as a child to be a once-for-all event, but I also couldn’t miss the opportunity to renew my baptismal vows in these ancient waters. It was refreshing on so many levels, it was enriching, it was life-changing. 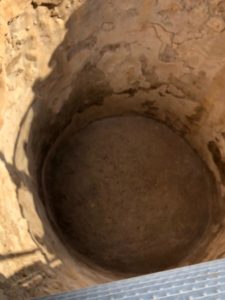 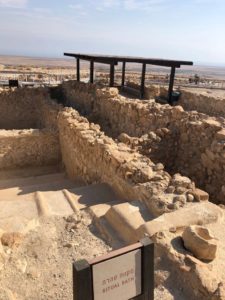 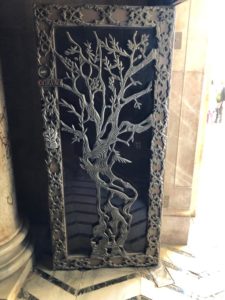 As indeed was nearby Qumran, where John the Baptist is understood to have lived awhile before beginning his ministry. It’s also the place where thousands of ancient parchments were found, hidden in caves centuries before by a deeply religious sect of the Jews called the Essenes. Their dwellings, their all important cisterns, both for drinking-water and for ritual bathing, their cave systems were all very  impressive, not least because just surviving in these harsh unforgiving lands would have been challenging enough. The heat, dust and barrenness of the area brought into sharp focus the physical, emotional and spiritual effects endured by Jesus when he was ‘driven’ by the Holy Spirit into the desert for 40 days and 40 nights, not just to face deprivations but also the terrifying temptations to turn back from the path prepared to Golgotha. 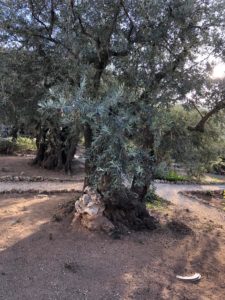 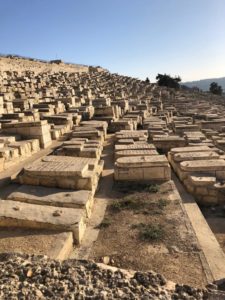 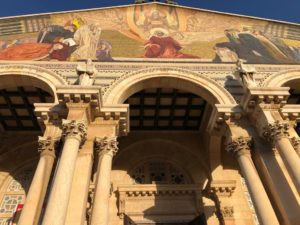 And so we returned to Jerusalem to begin our own journey to ‘the place of the skull’. Beginning with the Mount of Olives, overlooking the ancient walls of Jerusalem, with its warrens of Jewish, Moslem and some Christian gravestones of those who wanted to be buried in this holiest of places awaiting the arrival (or for many the return) of the Messiah. You find yourself pinching yourself frequently in Jerusalem, checking constantly, am I really here, in this holy city, seeing all this history, walking around places that have been familiar since childhood? 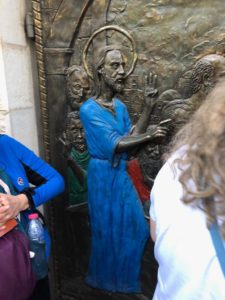 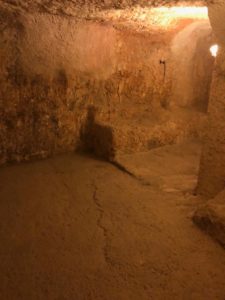 We visited many sites and places of significance, many of which will make their way into my sermons over the coming months, but a visit to what is believed to be the house of the High Priest Caiaphas, where Jesus was tried and mistreated was both moving and inspirational. Under the by now inevitable ornate Church was a dungeon, a cave really, where it is suggested that Jesus was dumped overnight to await further trial and ultimately execution. While we had the benefit of soft reflective lighting, I found myself wondering what it felt like, in pitch black darkness, knowing what was coming, a level of loneliness and fear I can (thankfully) only imagine; how quickly we lose sight of what exactly Jesus endured for love of us! Shalom. Baden