From Jordan to Jerusalem – Day 6

‘Feeding a Nation’
These reports of our adventures should probably be called Postcards. While they are written while here, the chances are that we’ll be well home before you get to read them! Today’s experiences all fell loosely around the theme of ‘Feeding a nation’, hopefully you’ll understand why by the time you finish reading. We ended our time in Kibbutz Afik this morning and notwithstanding the tummy trouble some of us have continued to endure since Jordan, we have really enjoyed the location, the facilities and the food. 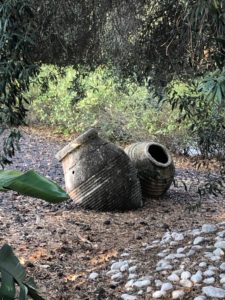 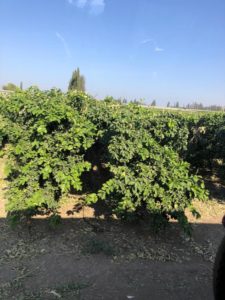 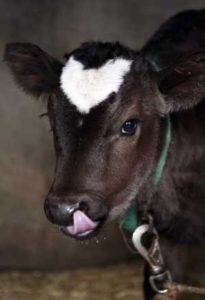 On to two other Kibbutz’ one of which was a community of 150 families, with approximately 400 members. To live in a Kibbutz community you contribute what you can and you receive back whatever you need. This was a big operation, with hundreds of acres of grapefruit, bananas, dates and avocado. There was also a very active dairy farm with newborn calves to ‘ooh and aah’ over. Farming in Israel is incredibly intensive with production yields maximized to the nth degree. It was fascinating seeing how people of all ages work together for a common good. The demand for organic foodstuffs has led to some interesting changes in farm practices; instead of using environmentally damaging fertilizer they have started taking in hordes of abandoned and abused donkeys and letting them roam freely under the tall Date trees; their natural wastage is a far more productive and cheaper form of fertilizer.

It was then on to the first Kibbutz established approximately 100 years ago. It was fascinating seeing the determination, skill and creativity that helped them establish critically needed farms to feed a nation in such harsh conditions.

We next turned to a more spiritual form of feeding with a visit to Nazerath, where Jesus lived approximately 27 years of his 33’ish year long life. As we all know, Joseph was a carpenter. Quite possibly your image of what he did is probably around making cabinets and furniture, fixing doorframes, and this is certainly some of what he did; however the Aramaic word for carpenter is the exact same as that of stone mason. This is significant in that King Herod, (he of the ‘slaughter of the innocents’ infamy) was building Caesarea nearby; making it likely that Joseph was probably working for the king who would so brutally try to destroy the newborn Jesus. The life size village replica of Nazerath was closed on Sundays but we had a wonderful exploration of the Bascillica of the Annunciation built over the quite-possible home of young Mary, (Miriam in Aramaic). Our guide explored with us our understanding of our Christmas Gospel passage from John 1. There is an assumption that the angel Gabriel came to announce that Mary would soon become pregnant despite her being a virgin, however the words of greeting in Aramaic would actually imply that at the moment of announcing, ‘the Word became flesh’. Being there, in Nazerath, brought home how shocking this news would be to a young teenager who is engaged to an older man and indeed to her family. Here again was a sense of God ‘feeding a nation’ by becoming flesh for them and us. 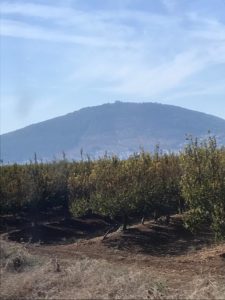 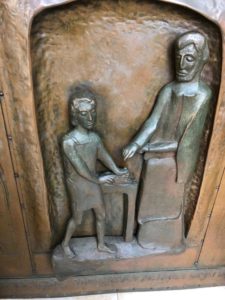 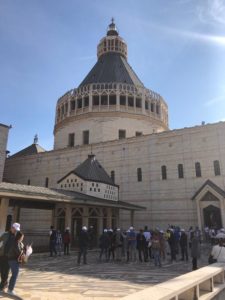 On then to Caesarea, a coastal city on the Mediterranean which was envisioned, planned and built (with the help of several thousand workers). There was the ruins of a vast castle including a Hippodrome, an outdoor auditorium and even a whole new harbor complete with breakwater foundations. Herod was savage, it is said that he ordered all prisoners to be publicly executed at the moment of his death so that the sound of gut-wrenching grief would be heard across the nation. Thankfully his orders were ignored when he died. Having said all of this, his harbor did ensure vital supplies reached his kingdom, thereby feeding a nation. 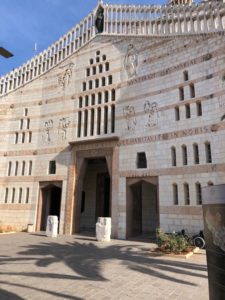 Caesarea was where St Paul was imprisoned for two years before being sent to Rome for what would end up being his execution. But it was also the home city of a God-fearing gentile called Cornelius. He had a vision that he should seek out someone named Peter to hear him speak about God, at the same time Peter was praying on a roof top and was shown a vision of unclean animals which he was invited by God to eat. His subsequent visit to Caesarea has had rippling repercussions for nearly two millennia, as without that encounter it is highly unlikely you and I as gentiles, (non-Jews) would ever have heard of Jesus, let alone worship him. It’s not just about feeding a nation but also a world of souls. Shalom, Baden. 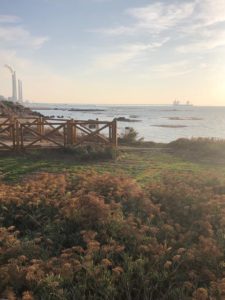 Ps. The last picture is not anything to do with feeding, in fact it is part of a ruined communal toilet; now what made me think of that!!