‘Fishers of (wo)men’
Day 3 was something of a slog with a long long bus journey from Jordan to Kibbutz Afik on the western bank of the river Jordan. A number of us were afflicted with upset tummies making the journey feel even longer! Suffice it to say that Day 3 became a bit of a blur.

Day 4 however, more than compensated when we awoke early to the wonder of the Holy Land. Stunning views and a tangible sense of excitement, not so much because we might be stepping exactly where Jesus trod; too much has changed in 2,000 years for that to be; but it was the sense of stepping into an extraordinary history that hasn’t yet been finished that made it truly awesome. Our guide, Yael, draws her narrative closely around key questions; like why did Jesus move from Nazareth all the way to Caperneum on the shores of Galilee to minister for three years?

Our first stop was to the suggested site of the Sermon on the Mount, particularly focusing on the Beatitudes. Here we encountered the ‘tourist phenomenon’, where hundreds, and even thousands turn up at the same time to try experience the holy site in a multitudinous mix of races and creeds. I have learned that ‘outside’ is usually better than ‘inside’ to connect with the sacred. Each site inevitably has a church structure that is sadly usually not congregational as so few Christians live in the area. In a funny way, the hustle and bustle of the crowds did help us get a better sense of what it was like all those years ago when thousands listened to words that were literally about to change the world. We also got our first glimpse of the Sea of Galilee with its silky smooth waters, (apparently it was much rougher last week!). 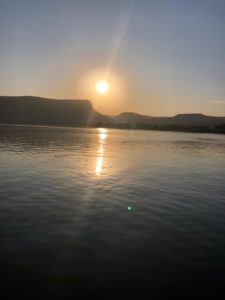 On then to the ruins of Caperneum, with the layout of a significant coastal town still plainly discernible. You couldn’t help but feel that the house being presented as Peter’s was a little grand for a simple fisherman and his family. I found a more ready connection with the simple black walls of a smaller dwelling nestled nearby with many other homes. It was a very special place all the same, especially since we were within arms-reach of the waters of Galilee. 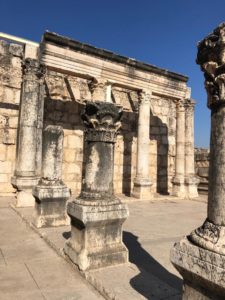 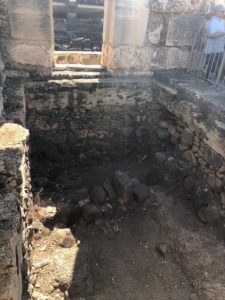 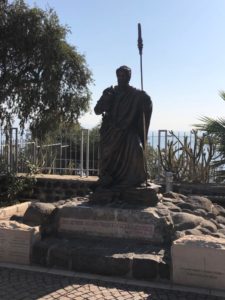 Nearby we paused for lunch in Genesseret, where Jesus cast out the legion of demons from the poor unfortunate soul they had been tormenting for many years. Here was a surprising spirit-awakening insight: the waters of Galilee are much lower now than they would have been all those years ago, (a combination of climate change and increased water usage) on a hill further in from the water you can see a number of hollows and caves, perhaps one of those was where the tormented man survived, shunned by those who herded swine nearby; and remarkably where Jesus told him to return so he could tell this same people what God had done for him.

On then to the museum where a two-thousand year old fishing boat was discovered submerged in the mud of the nearby sea. Its size brought home to me how frightening it must have been when the disciples were squashed in together with a sleeping Jesus as a storm squall threatened to swamp them.
One of the highlights of this trip will forever be the hour spent on a (somewhat larger) week-old wooden boat on the becalmed Sea of Galilee. Here was wonder in abundance, and music, and laughter, and even dancing! We even had ‘Peter’ casting his net ‘on the other side’ unfortunately without success this time! Truly magnificent. 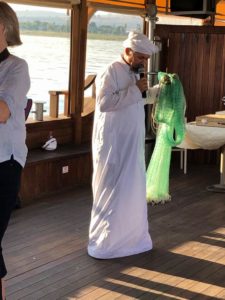 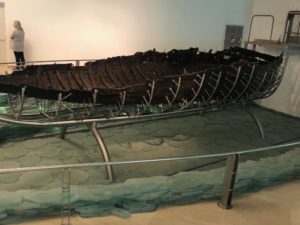 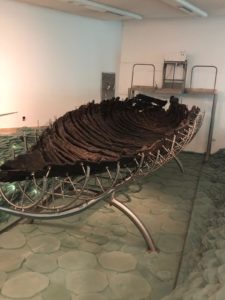 Yael had one more surprise for us, a stop-off at the only recently discovered and opened ruins of Magdala, of Mary Magdalene fame. It promises to be a ‘must see’ site for tourists and pilgrims alike. It was also a very fitting end to a day remembering Jesus call to simple fishermen, recently healed ‘demoniacs’ and the first witness of the resurrection to ‘go tell everyone, the news that the Kingdom of God has come!’ Its our calling too!  Shalom. Baden 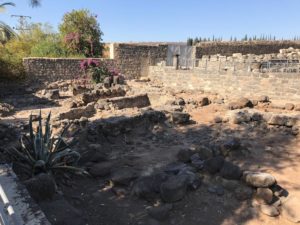 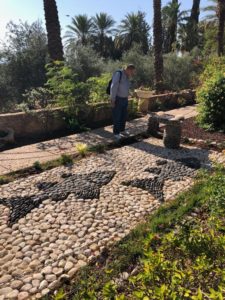