From Jordan to Jerusalem – Day 2

When you travel through land that has been dry for millennia you appreciate all the more the glimpses of green that spring up (literally) where sufficient levels of water reside deep beneath the harsh and hardened surface. While Moses struck the rock near Mt Horeb, it seems every oasis here is named after him. This isn’t just touristic hyperbole, it is a recognition that both history and nature work hand in hand in the struggle to survive. 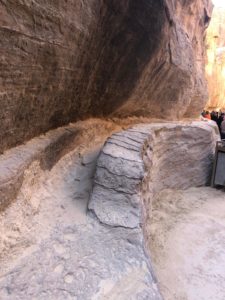 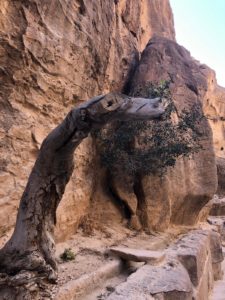 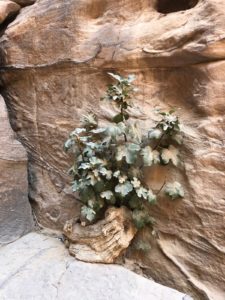 Day 2 brought us south to Petra (literally, The Rock) a world heritage site which was designated one of the Seven (new) Wonders of the World. And it truly is a wonder. Every step you take into Petra brings new levels of awe. It puts you in mind of the Grand Canyon, with towering rock stretching to the sky; The gorge has grown downwards through Rock that has been slowly worn through by eons of water seeping and searching out the softer seams of sandstone. We have been learning of a nomadic tribe, known as Naboteans, who travelled the ancient trade routes for centuries before settling In Petra approximately 200 years before Jesus was born. They were practically wiped out in 106 AD when the ruthlessly efficient Roman army took over the area. Where the Romans like to build things, roads, aqueducts, arches etc; the Naboteans likes to carve downwards. Using skills and a perseverance that is hugely impressive, they hollowed out hard rock to create caves, monuments and depictions of their many Gods. Their resilience and persistence is evident everywhere you look as you enter this vast gorge. They left little by way of writing and communal history, but they carved into rock an enduring legacy of culture, worship and ingenious irrigation. 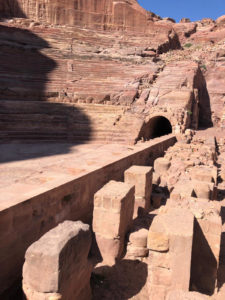 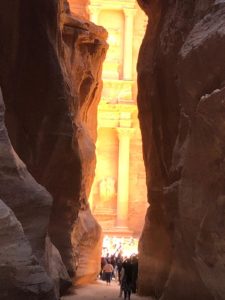 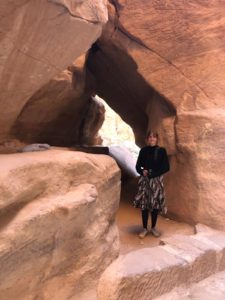 Long long before Irish Water began trying to ensure a safe and drinkable water supply, the Naboteans created a water supply system that both worked with and defied their rocky environment. Not only did they hollow out life-supplying water channels, they actually created stone tubular ‘pipes’ which protected the flowing water from dust and dirt. ‘Water is life’ has rarely been more true than here in Petra, where a civilization lived or died on its water supply. I was struck deeply by a sense of the endurance of ability, and the powerful impact that gathering water can have on its surroundings. I was also struck by the awful impact that the absence of water can have.

Today’s reflection is a simple and somewhat terrifying thought; as our natural resources deplete at an alarming rate, surely future wars will be about water rather than oil. Water is life.